There has been a long tradition of artists employing assistants.  Georgia O’Keeffe, for example, was blind (macular degeneration) at the end of her life.  Her assistant helped prepare and paint the canvasses according to her direction.  El Anatsui, (see the post from March 27), employs large teams of people to fabricate his hangings.  It is a common practise in the art world.

Aganetha Dyck also has a large swarm of assistants.  She uses bees to help her create her art. 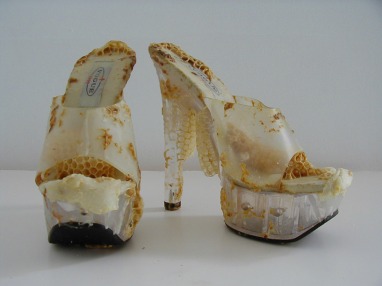 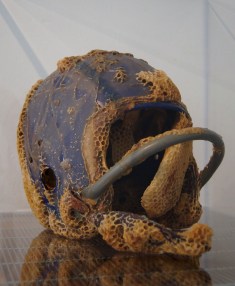 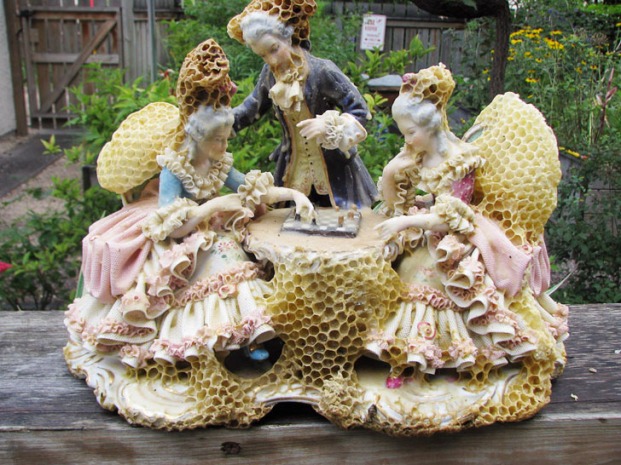 Click here for a brief, informative video about the genesis of her idea to work with bees, and images from an installation of a show in the Confederation Centre of the Arts in Charlottetown, Prince Edward Island. Here is an interview with Ms Dyck, and the link provides more very good images of her work. 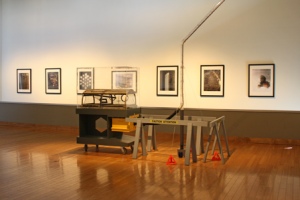 Installation at Confederation Centre of the Arts, 2011

I love that Ms Dyck commissioned Di Brandt to write a poem for her installation Working in the Dark, at the DeLeon White Gallery in Toronto in 1999.  Art and poetry: a perfect match.  The poem was translated into braille, and the sheets of paper were introduced into bee hives.  Most of the bees’ work was done in the dark, and the work was checked only shortly before the show.  Juan Antonio Ramirez wrote  Aganetha Dyck: Nature as Language in which he discusses her work, and its meanings.

While I was working at Martha Street Studio, an edition of intaglio prints was produced, which were then ‘finished’ by the bees.  Each print of the edition was unique, and all of them are beautiful. 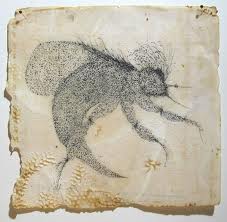 Aganetha Dyck received the Governor General’s Medal for Visual and Media Arts in 2007. She and Daphne are in good company.

The impetus for Henri Matisse: The Cut-Outs at MoMA was the restoration of The Swimming Pool, (1952) Matisse’s only site specific cut out installation.  MoMA acquired the work in 1975, and it hasn’t been on display in more than twenty years.

The story behind The Swimming Pool goes something like this……One summer day in 1952, Matisse decided he wanted to go down to the local swimming pool to watch the divers.  Not surprisingly, it being the south of France, he found it too warm, and returned to his home, intent on creating his own swimming pool.  The dining room was chosen, and Matisse and his assistants went to work, making history. 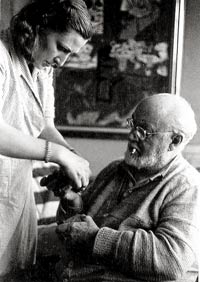 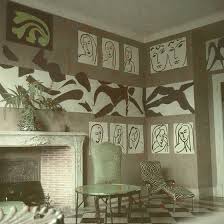 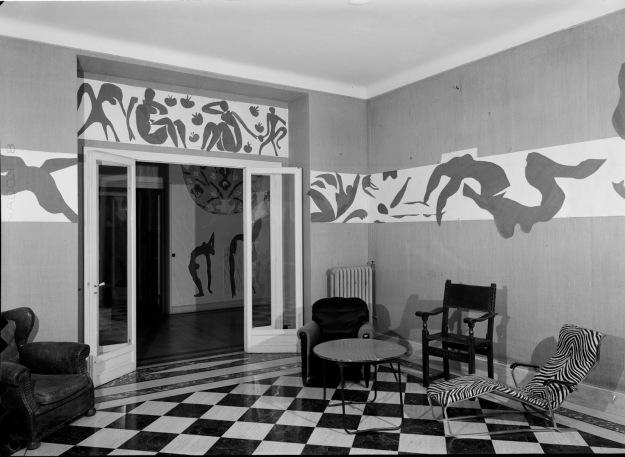 The restoration of the work began in 2008.  It was an extensive project to return the paper colour to its original balance, and remove and replace the deteriorated burlap on which the paper cuts had been mounted.  At times, the burlap was removed strand by strand. The result of all the time, money and care expended is a stunning reclamation of a charming work of art.

Matisse: The Cut-Outs recreates The Swimming Pool in all its dining room-sized glory. 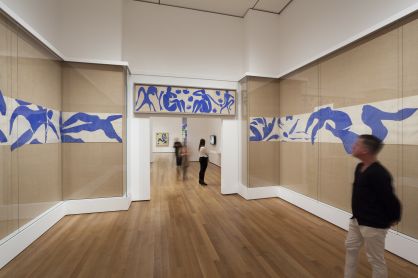 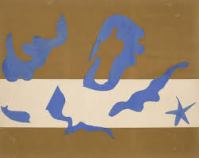 Detail of The Swimming Pool, 195f2

You’ve got to love a church that has a Poet in Residence, (currently Marilyn Nelson)  and lists Judy Collins as one of their artists/musicians in residence.  Never mind that it is a beautiful space, with a lovely communion service, and an socially active community……now there is also a stunning art installation by Xu Bing on display for all to enjoy. 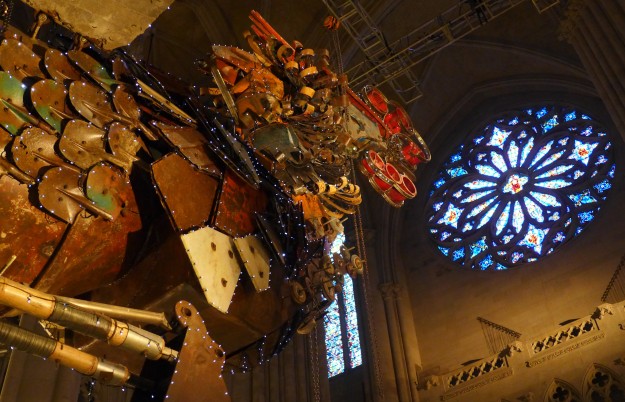 At least this time I was (somewhat) prepared, having checked the Cathedral of St. John the Divine website for service times. (Yes!  The Art Caravan has been on the move.)

Unlike Anne Patterson’s installation for Grace Cathedral, (see previous posting), this artwork is not site specific, and wasn’t originally intended as a cathedral installation.  Xu Bing, a contemporary Chinese artist, had been commissioned to create artwork for the World Trade Centre under construction in Beijing in 2008.

He decided that the glass atrium between the building’s two towers would be the perfect setting for two phoenixes, the male Feng and the female Huang.  The phoenix is an important symbol of unity and peace in Chinese mythology.

Xu Bing chose to construct the birds from the detritus of the construction site.  How apt for a phoenix?

Construction was delayed, in large part due to the demands of the Beijing Olympic Games, and then the financial challenges of the times.  The builders became more cautious, and censorious.  They demanded that he cover the structures–all 12 tons–in crystals, as they appeared ‘unfinished.’  When Xu Bing refused, all money and support for the project was withdrawn.

Fortunately, the art collector Barry Lam, acquired the work.  It was shown briefly in China, and at MASS MoCA last year.   The work is beautiful, and graceful. The vast nave of the cathedral is a perfect setting for these ‘birds.’ 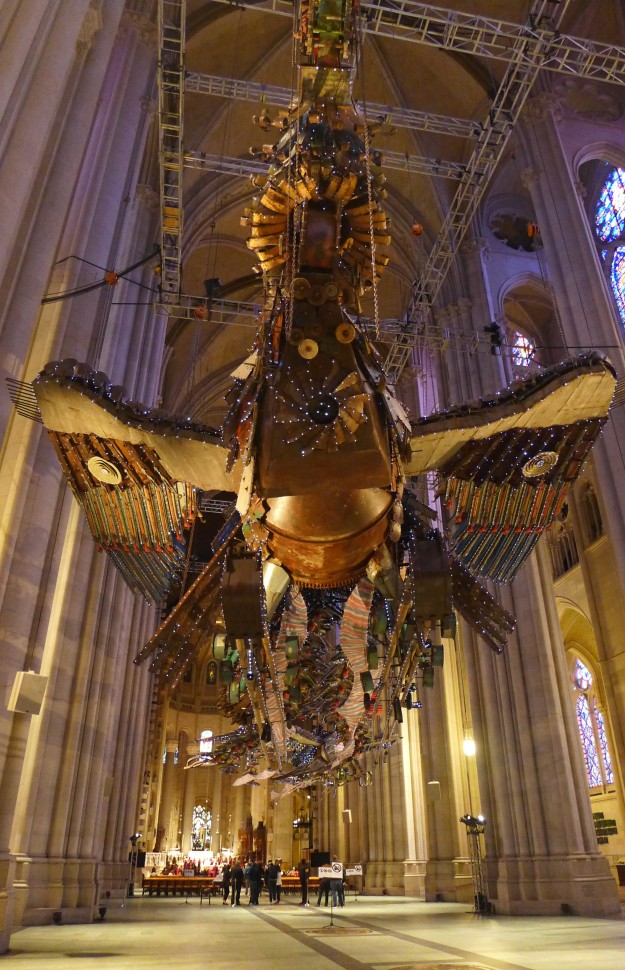 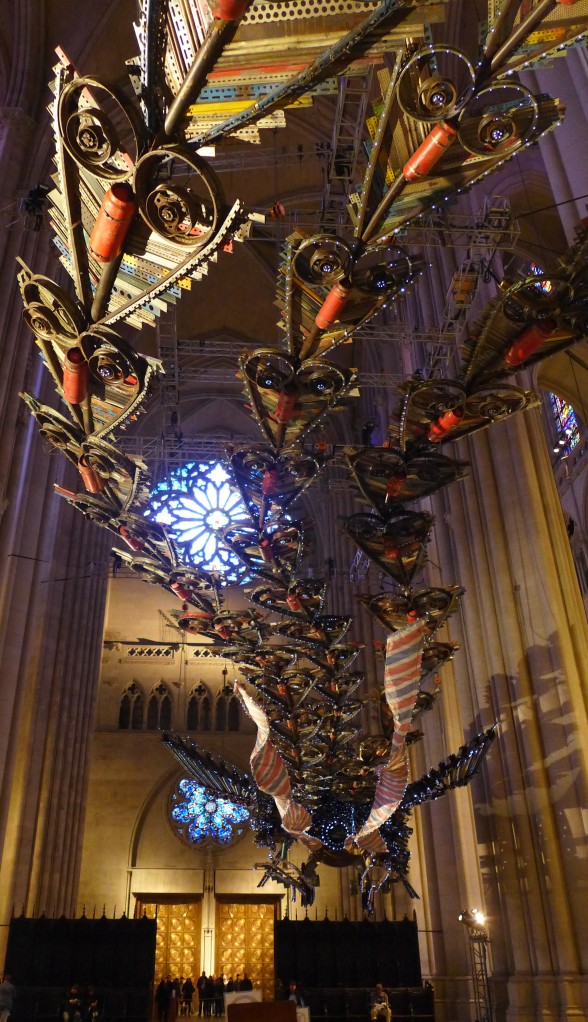 I’ve never wanted to visit Alcatraz.  I don’t understand the appeal.  The Art Caravan pulled into San Francisco last week, and was offered the opportunity to tour Alcatraz.  Thank goodness a friend  mentioned the art show at Alcatraz or I probably wouldn’t have gone.

What a loss that would have been.  To put it plainly, this is one of the best exhibitions I have ever seen.  Ever.  Really.

The art show is actually a series of installations by the contemporary Chinese artist, Ai Weiwei.  He is considered to be as much  activist, as well as  artist.

There are seven different installations. Weiwei deals with the ideas of confinement, repression, and suppression.  He uses a variety of materials: sound, porcelain, recycled metals and playthings (Lego, and kites.)

He has been critical of his government, and is currently unable to leave China.  His re-purposing of the different spaces in the prison is most remarkable, when one considers he was not able to visit Alcatraz.

The artwork is very site specific.  His use of individual cell blocks as ‘sound booths’ for broadcasting was extremely moving.  One cell was filled with  classical music written by the Czech/Jewish composer, Haas, while interred at Terezin concentration camp.  Each cell had a different musician, poet or speaker. 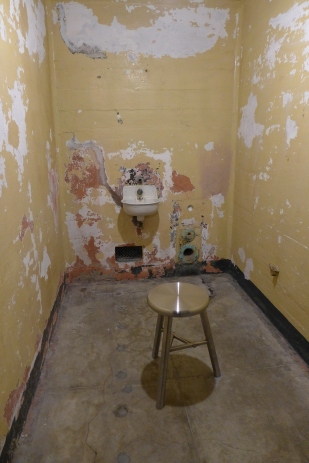 Interior of a cell 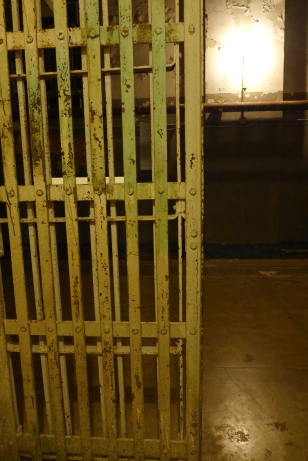 View from inside the cell 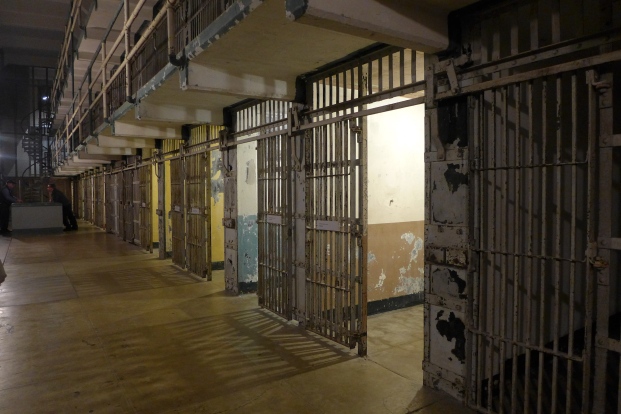 I wasn’t actually able to enter the psychiatric holding cells,  The sound and space were too powerful for me. 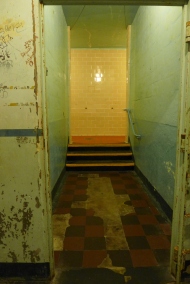 Hallway to the psych cells 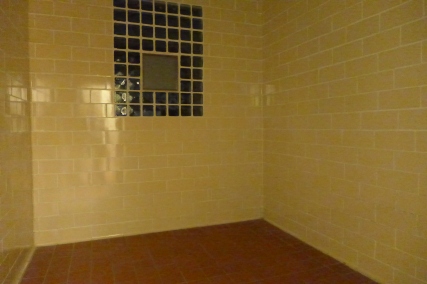 The last installation I saw was remarkable.  It is composed of recycled metal, including solar panels.  It is like a giant winged creature, contained in a space.  One views is from a narrow, poorly lit corridor. 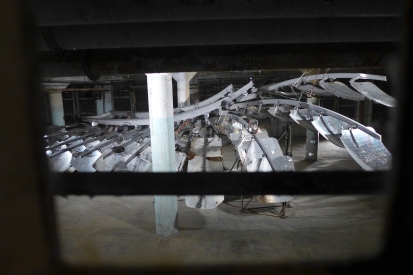 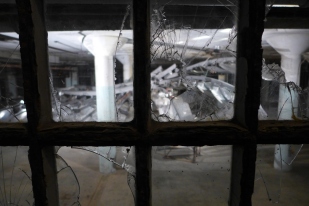 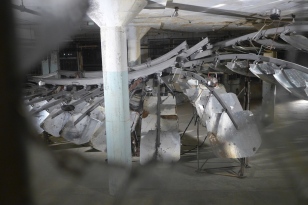 …a match (or mis-match) made in art heaven?

James Adams recently wrote a great feature in the Globe and Mail about Koh’s participation in Luminato, the  Toronto arts festival. One of Koh’s projects is an homage to dear Emily, at the McMichael Canadian Art Collection in Kleinburg (just north of Toronto.)  As part of the installation he wrote this haiku….

a way to the light

Not bad for a guy who’s been labelled a “young punk capitalist.” I’m guessing Emily would be honoured. 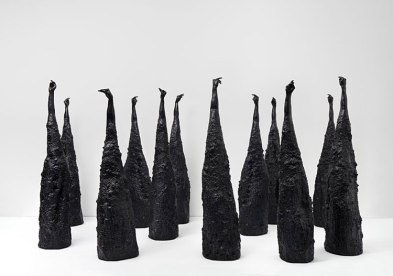 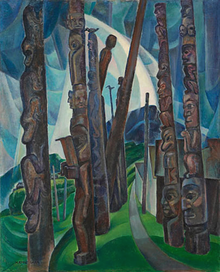 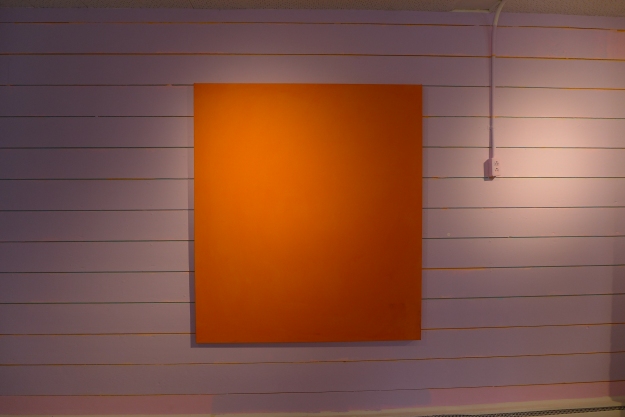 I was very happy that I stopped by the Vancouver Island School of Art a couple of weeks ago to see the art installation, Paradise Lost, by Xane St. Philip.

Xane’s installation completely transformed the gallery.  (If you haven’t been there, imagine an old school –and I do mean old school— building’s basement, dark and dingy, albeit with a few windows and doors….not the most aesthetically pleasing, or comfortable space.)

The space itself became a work of art.  Xane gave an artist’s talk, and explained some of the features of Paradise Lost.  He talked about colour theory, as espoused by Josef Albers.  He touched on the components of a classical garden, and he elicited participants’ responses to the title of the installation, Paradise Lost.

Just as the beauty of a garden is transitory, Paradise Lost has come and gone from the Slide Room Gallery at VISA.  I look forward to the catalogue, and I’ll never again look at that gallery space in quite the same way. 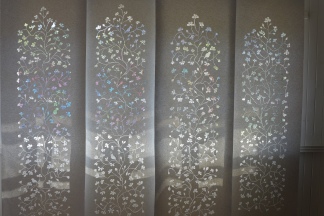 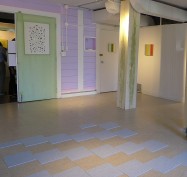 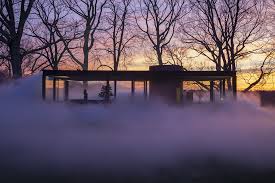 ‘Veil’ at the Glass House

Imagine fog as a medium for creating art.  How cool (damp, too….) is that?

Fujiko Nakaya is a Japanese artist who uses fog to create art installations.  Her father was a physicist who made the first artificial snowflakes.  Ms Nakaya uses a chemical free, fine nozzle system adapted from an invention originally intended for agricultural use.

Ms Nakaya presented her first fog installation at the Osaka World Expo in 1970.  She currently has The Glass House in Connecticut enveloped in fog.  She says, “I’m making an invisible, natural phenomenon visible.”

Unfortunately, the Art Caravan won’t be travelling to New Canaan, Connecticut any time soon…..but, who knows?  The installation is open to the public from May 1 to November 30, 2014.

Congratulations to Mowry Baden!  He was recently awarded the Guggenheim Fellowship.

This past February, I was fortunate to hear Mowry speak at a CARFAC panel on Public Art.  He  talked about his practice producing public sculptural installations.  His work involves the experience of the viewer interacting with the objects he creates.

Mr. Baden addressed the ideas of Institutional Vandalism, Public Outrage, Benign Neglect, Art as Amenity, and Self Financing Public Art.  He showed examples of his work in the U.S., as well as local art commissions in Victoria.

Mowry is speaking again this weekend, as part of Reclaim the Streets:  A Symposium on Art and Public Space at Open Space in downtown Victoria.

The Wall of Death